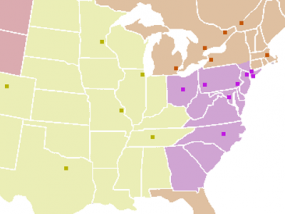 When I put together my second round of thoughts on the NHL’s planned 2013-14 realignment, I wasn’t trying to be optimistic. Re-reading them in the context of the series of tweets about the realignment plan by TSN’s Bob McKenzie today makes me think I was being naive, however. Add in reports from ESPN’s Pierre LeBrun and it doesn’t get better.

The tweets, for context…

That sure sounds like two conferences with two divisions each, not four conferences. And LeBrun confirms, though he and McKenzie disagree on which naming convention for the divisions is the first choice.

According to NHL memo sent to 30 teams, no longer is the idea to go to 4 conferences, but rather 2 conferences with two divisions each
— Pierre LeBrun (@Real_ESPNLeBrun) February 26, 2013

And a unique idea that would have made for an interesting set of possibilities in the third and fourth rounds is gone.

Don’t get me wrong, I still like the realignment. Greedily, all I wanted out of realignment was more Original Six matchups for Detroit, with more games in the Eastern Time Zone as a secondary goal. I think the playoff system is ridiculous, though.

If you’re accounting for disparity between divisions by allowing for a crossover (and that’s what this is, not a true wild card), why not account for disparity across conferences as well? Because that would be hard.

The way I see it, there should be either no wild card or there should be four wild cards shared across all divisions. If the #5, #6, and #7 teams in the Pacific are better than the #4s in the rest of the league, why should only the #5 get a chance to cross over?