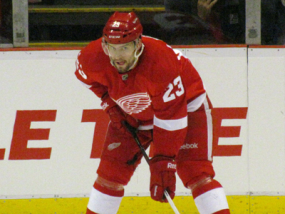 93
0
by Clark Rasmussen
In General News

Lashoff, 22, is in the final year of his entry-level contract. He signed with the Red Wings in 2008 after going undrafted and had been unable to break into the NHL until injuries decimated the Red Wings’ blue line at the start of this season.

With the Red Wings missing Jakub Kindl, Carlo Colaiacovo, Jonathan Ericsson, Ian White, Brendan Smith and Kyle Quincey at various points this season, Lashoff has appeared in fifteen of Detroit’s nineteen games. He’s scored a goal and added two assists while going -4, playing on all three defensive pairings and getting opportunities on both the power play and the penalty kill.

In 125 career AHL games with the Grand Rapids Griffins, Lashoff has nine goals and twenty assists.

The deal will reportedly carry a salary cap hit of $725,000. It is a one-way deal for all three seasons.