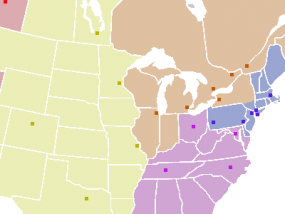 Updated: 10/13, 7:30 PM (and 7:55 PM): Hi Puck Daddy readers. Since this was originally published I’ve fixed the fact that I left St. Louis off the Central list (they’re on the attached map) and I’ve bolded one line of it to emphasize the fact that I don’t entirely agree with my own proposal here. I do think I’m close to something that could be used, I don’t think it’s perfect.

The Winnipeg Jets – playing in the Southeast Division this year as the league did not realign following the Atlanta Thrashers’ move north – would switch into Detroit’s spot in the Central.

As a proponent of moving the Red Wings to the Eastern Conference, even I have to say this is a bad idea in more ways than one.

The obvious is that there are two current Western Conference teams that fit into the Southeast Division better than Detroit – Columbus and Nashville. Nashville is the better of the two geographically but is in the Central Time Zone.

Similarly, Winnipeg in the Central Division while Minnesota is in the Northwest Division is an awkward fit. Minnesota to the Central while Winnipeg goes to the Northwest would fit geographically but McKenzie says that the league wants to avoid putting one US-based team (Colorado) with four Canadian teams (Vancouver, Calgary, Edmonton and Winnipeg).

The problem with any realignment based on the Thrashers’ move to Winnipeg is that the Western Conference team switching over has to go into the Southeast Division. The Atlantic Division is too tightly-packed to break one team out of it to shift south.

To me, the solution is to blow the whole thing up. Unlike the four-division and three-conference plans we’ve heard before, my idea is five divisions and two conferences.

Yes, that’s an odd number of divisions with an even number of conferences. The reason is that divisions are not tied to conferences, teams are, and they’re only used for the playoffs.

Let’s start with the divisions.

The division names are negotiable as I realize Chicago is hardly the Northeast and the Civil War inspired Blue Jackets in the Southeast is borderline criminal.

Each team plays divisional rivals six times (thirty games) and non-divisional opponents twice for a total of 78 games. If the owners are concerned about losing home dates, add in one more game against each team from one of the other divisions (rotating annually) for a total of 84 games.

Every team plays each of the other teams at least twice and most rivalries are left intact (though Boston and Montreal fans would probably hate it).

How do you align five divisions into a playoff? You don’t.

When it comes time for the playoffs, the conferences kick in. Each team belongs to a division and a conference, the divisions don’t belong to conferences. This means that while Detroit and Toronto might share a division in the regular season, they could still meet in the Stanley Cup Finals.

Playoff brackets then happen the same as the current setup except for divisonal winners not automatically getting the highest seeds. I’d be fine going single-table in the playoffs but North American sports has long had the idea of conference-based playoffs.

I think you can get away with ignoring divisions for the playoffs because we already have an unbalanced schedule. In the current NHL, Detroit plays Columbus more than San Jose does yet Detroit and San Jose are compared as if they had played identical schedules when playoff seeding is determined. Really, this is no different.

The hybrid alignment gives us the benefits of blowing up the current divisions while not forcing a need to change the playoff system.