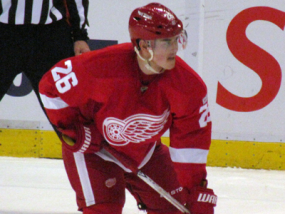 Jiri Hudler scored the Red Wings’ only regulation goal and added another marker in the shootout, leading Detroit to a 2-1 win over the Florida Panthers Sunday afternoon.

Hudler snapped a shot over Florida goalie Scott Clemmensen’s shoulder in the second round of the tiebreaker, then Detroit netminder Jimmy Howard stopped former Wing Mikael Samuelsson and Kris Versteeg shot high. Pavel Datsyuk and Wojtek Wolski had scored in the first round and Todd Bertuzzi was stopped for Detroit in the third round.

Tomas Fleischmann opened the game’s scoring with 2:22 left in the first period. The former Detroit prospect was left all alone at the top of the right faceoff circle after Versteeg gained the Red Wings’ zone on a rush. Versteeg sent a cross-ice pass to Fleischmann for a one-timer past Howard.

Hudler tied things up at 5:30 of the third period when his attempted slap-pass from the right wing to Valtteri Filppula at the edge of the crease went off John Madden’s skate and past Clemmensen.

Clemmensen finished the afternoon with 31 saves on 32 shots against. Howard made 27 saves on 28 shots.

Neither team scored a power play goal, with the Panthers getting six tries with the extra attacker and the Red Wings getting three.

Detroit will be back in action on Wednesday with a visit to the St. Louis Blues.


Quincey Suspended One Game for Charging