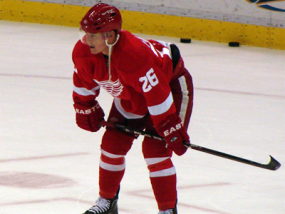 88
0
by Clark Rasmussen
In Game Recap

Bertuzzi opened the scoring with 7:02 remaining in the first period and the Red Wings on the power play. Johan Franzen gained the Colorado zone and dished off to Bertuzzi to carry up the right wing boards. Bertuzzi cut to the right faceoff circle and snapped a shot over the shoulder of Colorado goalie Peter Budaj.

Hudler made it 2-0 just 30 seconds into the second period. After stepping out of the penalty box on a carry-over penalty from the first period, Hudler took a long pass from Nicklas Lidstrom to break in alone on Budaj. Budaj stopped his first chance but Hudler kept control of the puck and sent it out front from behind the net, banking it off of Budaj’s skate and in.

Danny Cleary put the Red Wings up by three at 5:52 of the second. Bertuzzi carried the puck down the right wing and sent it to Cleary in the slot for a backhand chance over Budaj’s shoulder.

John-Michael Liles scored Colorado’s lone goal at 5:28 of the third period, moving from the slot to the left faceoff circle and outwaiting Henrik Zetterberg and Detroit netminder Jimmy Howard to get a shot at the open net.

The goal came on a five-on-three for the Avalanche. They finished the night one-for-five on the power play while the Red Wings went one-for-four.