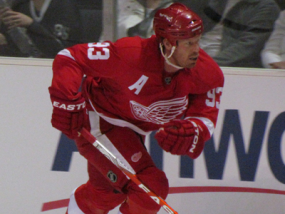 The win was Detroit’s second in a row after a six-game losing streak.

Nicklas Lidstrom got the Wings on the board at 8:54 of the first period. Colorado defenseman Ryan Wilson cleared the puck off the end boards right out into the slot, where Lidstrom was all alone for a one-timer past goalie Semyon Varlamov.

Franzen’s first of the night, originally credited to Valtteri Filppula, gave Detroit a two-goal lead just 2:36 into the second. Filppula carried the puck into the Colorado zone on a power play and held up along the right wing boards, giving Henrik Zetterberg time to get to the bottom of the right circle. Filppula sent the puck to Zetterberg, who moved it on to Jiri Hudler at the top of the left faceoff circle for a pass back to Filppula, who fired a shot past Varlamov that was tipped by Franzen in the slot on the way through.

Another deflection 4:17 later would give Franzen two goals on the night, when he tipped Niklas Kronwall’s slap-pass from the left point past Varlamov from the slot.

Colorado got on the board with a power play tally of their own at 8:18 of the middle period, with rookie Gabriel Landeskog banging the puck out from under Detroit netminder Jimmy Howard and into the net.

Danny Cleary restored the Red Wings’ three-goal lead with 5:14 remaining in regulation, first tipping a drive by Pavel Datsyuk, then going to the net to knock home the rebound.

The Avs cut it to 4-2 with a Milan Hejduk power play goal with 3:05 remaining. Hejduk picked up a loose puck right in front of the Detroit net and backhanded it past Howard.

Franzen completed his hat trick to wrap up the game’s scoring, lofting a backhander from the neutral zone into the empty Colorado net with 32 seconds remaining.

Each team scored twice on the power play on the night. The Avalanche had three tries with the extra attacker while the Red Wings had five.

Howard made 24 stops on 26 Colorado shots. Varlamov stopped 13 of the 16 shots he faced before Giguere came in and made 12 saves on 13 shots.

Todd Beretuzzi (illness) and Patrick Eaves (back) were the scratched forwards for Detroit, while Mike Commodore was a healthy scratch on the blueline.