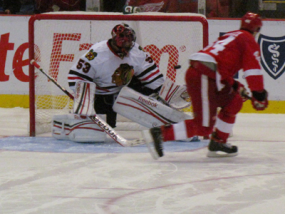 98
0
by Clark Rasmussen
In General News

Icing their “A” team, the Detroit Red Wings still needed a shootout to defeat the “B” team of the Chicago Blackhawks Sunday night, picking up a 4-3 victory in the tiebreaker.

Todd Bertuzzi scored a highlight-reel goal and Henrik Zetterberg added another with only Brandon Pirri scoring for Chicago.

Detroit had led 2-0 and 3-1 but the Blackhawks rallied both times.

Valtteri Filppula opened the game’s scoring, snapping a shot from the high slot past Alexander Salak on a Detroit power play at 7:35 of the first period.

Zetterberg made it 2-0 with 47 seconds left in the period, snapping a shot over Salak from in close off a feed from Johan Franzen.

Pirri scored his first of two goals shorthanded at 7:32 of the second, blasting a shot from the top of the left circle past Ty Conklin, off the post and in.

Nicklas Lidstrom made it 3-1 with Detroit’s second power play goal of the night just 1:23 later. Just as a five-on-three expired, he took a pass at the top of the right faceoff circle from Ian White and rifled it past Salak.

Jimmy Hayes pulled the Hawks to back within one with 3:59 left in the middle period, beating Conklin from right in front after being left all alone to take a pass from Ben Smith.

Pirri tied the game at 9:33 of the third, capitalizing on a Brendan Smith turnover. Smith gave the puck up to Hayes in the right circle who worked it on to Pirri in the slot for a shot past Conklin.

The Red Wings are next in action on Tuesday night when they’re in Grand Rapids for their second Red & White game of the preseason. The next night they’ll be in Chicago for a rematch with the Blackhawks.

Detroit lost forward Jan Mursak to a fractured ankle when he crashed awkwardly into the boards in the second period. He is expected to miss two months.