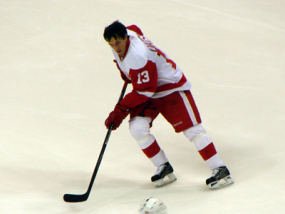 Datsyuk whiffed on his first chance from the side of the net with Chicago netminder Corey Crawford sprawled out, then took his time on the second shot and lifted a shot from the acute angle into the net, deflecting off of defenseman Nick Leddy on the way in.

The Blackhawks had scored twice in the first 4:19 of the game to take the early lead but the Red Wings scored three consecutive goals to pull out the win.

Dave Bolland opened the game’s scoring at 3:35 of the first period. With the Blackhawks on a power play, former Red Wing Marian Hossa’s shot was blocked in the right faceoff circle and Bolland picked up the puck in the slot, flinging it towards Detroit goalie Ty Conklin. Conklin got a piece of it but it slid under his pad and barely crossed the goal line.

Patrick Sharp made it 2-0 just 44 seconds later when he picked up the puck at the top of the left circle, skated all alone into the top of the slot, and blew a shot past Conklin.

Valtteri Filppula got the Red Wings on the board with a power play goal with 6:31 remaining in the opening period, just after the expiration of a five-on-three. Henrik Zetterberg sent a pass from the right faceoff dot through the legs of defenseman Niklas Hjalmarsson to Filppula on the far side of the crease for a quick wrister into the open side of the net.

At 7:53 of the third, the Blackhawks had a chance to go back up by two goals but Conklin stopped Jimmy Hayes on a penalty shot after Tomas Holmstrom covered the puck with his hand in the crease.

The Red Wings made that count with 4:45 left in regulation. On a flurry in front of the Chicago crease, Danny Cleary knocked home the rebound of a Zetterberg shot as Crawford was unable to cover the puck.

Crawford finished the night with 24 saves on 27 shots. Conklin stopped 29 of the 31 chances he faced.

The Red Wings will wrap up their four-game road trip on Tuesday when they visit the New York Islanders.

Detroit forwards Tomas Holmstrom and Darren Helm returned from groin injuries. Gustav Nyquist was sent back to the Grand Rapids Griffins and Chris Conner was a healthy scratch to make room for them in the lineup… Jakub Kindl was the healthy scratch on defense for the Wings.