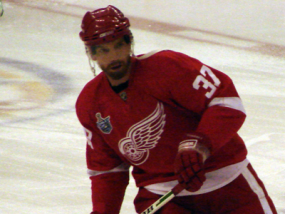 Samuelsson’s goal came on a three-on-one with Jiri Hudler and Valtteri Filppula.

Samuelsson blocked a pass at the Detroit blue line to start the play. Hudler carried the puck into the Chicago zone before passing off to Filppula in the slot. Filppula faked the shot and passed back over to Samuelsson to blast a one-timer past Chicago netminder Nikolai Khabibulin.

Chicago had opened the game’s scoring with 7:11 left in the first period as a cross-crease pass from Jonathan Toews defelected off of defenseman Jonathan Ericsson’s skate and between the pads of Detroit goalie Chris Osgood for a power play goal.

The Red Wings got on the board 3:54 later with a power play goal of their own, scored on a seeing-eye shot from the blue line by Brian Rafalski.

Dan Cleary scored a breakaway goal with 5:54 left in the second to give Detroit a lead. Cleary blocked a Brent Seabrook pass at the Detroit blueline and corralled the puck, racing in all alone to beat Khabibulin five-hole.

The Blackhawks tied things with another goal by Toews, who deflected a shot by Kris Versteeg past Osgood with 7:40 left in regulation.

Osgood finished the night with 37 saves on 39 shots. Khabibulin stopped 35 of 38 Detroit chances.

Each team scored once on the power play. Detroit had four tries with the extra attacker while Chicago had five, including 59 seconds of five-on-three time in the first period.

The series now shifts to Chicago for Games Three and Four on Friday and Sunday.

Red Wings head coach Mike Babcock announced after the game that Kirk Maltby will return to the Detroit lineup for Game Three. Maltby has been out since Game Seven of Detroit’s second-round matchup with the Anaheim Ducks.