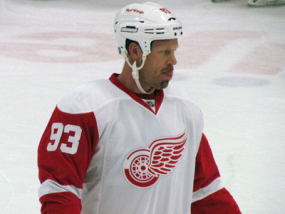 For the second consecutive night the Detroit Red Wings fell in the shootout, dropping a 3-2 decision to the Chicago Blackhawks 25 hours after an identically-scored loss to the San Jose Sharks.

Brandon Saad scored in the fifth round of the tiebreaker to win it for Chicago. Johan Franzen had the opportunity to keep Detroit alive but couldn’t beat Corey Crawford on his chance.

Henrik Zetterberg had previously scored in the second round while Marian Hossa beat Jimmy Howard in the third. Pavel Datsyuk, Damien Brunner and Gustav Nyquist failed to score for Detroit. Jonathan Toews, Patrick Kane and Michal Rozsival were stopped for Chicago.

After a scoreless first period, Viktor Stalberg opened the game’s scoring at 6:11 of the second. Duncan Keith’s chance from in close in the left faceoff circle went behind the net to Stalberg, who was left untouched to wraparound the far side and tuck it in behind Howard.

Franzen got the Red Wings on the board with 4:20 left in the period, tipping Carlo Colaiacovo’s shot from above the top of the left circle past Crawford for a power play goal.

Just 1:59 later, Cory Emmerton made a strong individual effort in front of the net to put Detroit out in front. After his attempted cross-crease pass was blocked, Emmerton gathered in the loose puck and dragged it to the top of the crease, lifting a shot over Crawford.

With just 2:57 remaining in regulation, Toews tied things back up. After a scramble in front that left Howard out of position, Johnny Oduya’s shot was blocked at the edge of the crease by Kyle Quincey. Quincey lost track of the puck and left it teed up for Toews to grab and fling into the open side of the net.

Howard finished the night with 26 saves on 28 shots. Crawford made 27 saves on 29 shots.

Franzen’s goal was the only power play tally of the night. Detroit had five chances with the extra attacker to Chicago’s three.

Colaiacovo was back in the lineup in place of Brendan Smith. Up front, Patrick Eaves was out in favor of Jordin Tootoo.