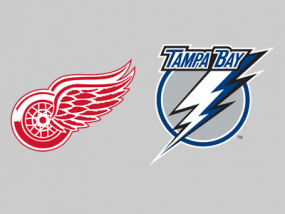 Tweeted some of this already but figured I’d post here too.

Overheard someone in the concourse at St. Pete Times Forum say that the game was closer than the score showed. That’s BS, though, aside from a five-minute stretch in the second period, the Red Wings dominated.

There was a guy behind me who kept yelling “Come on, Vinny!” to Vincent Lecavalier. A sign of how lopsided the game was is Lecavalier. He led the Lightning with six shots but got absolutely nothing and finished the night a -2.

The Wings did a fantastic job of limiting Tampa’s chances, even if they allowed 40 shots against. There weren’t a lot of times the Lightning really threatened (again, ignoring the five minutes in the second period).

Jimmy Howard came through with a strong performance on the chances that the team in front of him did allow. He made some big stops in the first period and looks more confident than he did during the Wings’ mini-slump a couple weeks ago.

In all, it was a shutdown effort against a team that wanted to use Detroit as a measuring stick. Can’t ask for much more than that.