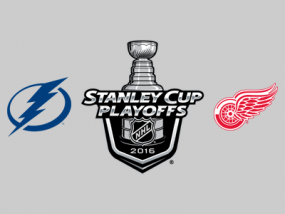 I’m not sure if the Red Wings deserved better than a 3-2 loss last night in Game Four against the Lightning, but I can’t shake the feeling that Tampa deserved worse.

The Lightning controlled the first ten minutes of play and scored their first power play goal in that time. But after that, they really didn’t threaten much outside of the power plays. The Red Wings started to come on, also didn’t threaten a whole lot, but it felt like they controlled the puck more (I’m not looking up the stats to back this up, this is eyeball analysis only). That carried through the second period and then the Red Wings turned it on to start the third and seemed to be in control until Tampa’s third and final power play goal, the eventual game-winner.

It was the penalty kill that doomed the Red Wings. On the three tries with the man-advantage where the Lightning scored, they moved the puck at will. The Wings just looked lost out there. And you just can’t do that. If you’re going to concede so much on the PK you’d better be making up for it on the power play and, once again, they didn’t.

With so much emphasis on special teams, you’re going to get some focus on the reffing standard, which was pretty atrocious. Tampa Bay scored during a penalty to Justin Abdelkader that was deserved, but then plays that were just as bad in the following minutes were allowed. The goalie interference call to Gustav Nyquist in the second period was an absolute joke. Then you have the cross-checking penalty to Jonathan Ericsson on which the Lightning scored the game-winner. Soft. Technically the right call, but in the context of what had been allowed all game, surprising. It’s hard to believe that the refs chose the final minutes of a tied playoff game to put their foot down and say “Enough is enough” about that play. Of course, it doesn’t matter if the Wings’ PK wasn’t a disaster.

So they’re left having to win three in a row, two on the road, against a team they’ve won one of four against so far. It’s a tough spot to be in. I don’t think they’ll do it.