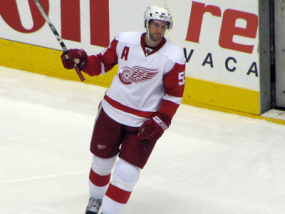 Detroit defenseman Niklas Kronwall scored with 16 seconds left in overtime Saturday night, carrying the Red Wings to a 2-1 win over the Phoenix Coyotes.

Kronwall fired a shot from the high slot through a screen set by Danny Cleary and over the shoulder of Phoenix goalie Ilya Bryzgalov to win the game for Detroit.

The goal came with seven seconds remaining in the Red Wings’ eighth power play of the night. They had been held scoreless with the extra attacker until that point.

The Coyotes had opened the scoring with ten seconds remaining in the first period.

After winning a faceoff in the Detroit end, the Coyotes worked the puck down to the corner. Martin Hanzel jumped to open space in the slot and Wojtek Wolski sent the puck to him for a one-timer past Red Wings goaltender Jimmy Howard.

Pavel Datsyuk evened the game up at 7:03 of the second when his centering attempt to Patrick Eaves deflected off the skate of Lee Stempniak and slipped past Bryzgalov.

Bryzgalov stopped 31 of 33 shots on the night while Howard made 25 saves on 26 Phoenix chances.

The Red Wings are now off until Thursday when they host the Calgary Flames to begin a four-game homestand.

The Red Wings iced only 17 skaters, with Johan Franzen, Kris Draper and Justin Abdelkader all out of the lineup due to injury.


Draper to Have Surgery, Out 4-6 Weeks