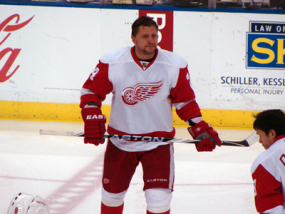 The Detroit Red Wings scored twice in the first three minutes Monday night, jumping out to an early lead that the Phoenix Coyotes never recovered from en route to a 4-2 win.

With the victory, Detroit leads their Western Conference Quarterfinal matchup, 3-0, and will go for the sweep in Glendale on Wednesday.

Ruslan Salei and Drew Miller scored just 44 seconds apart to get Detroit on the board.

At 1:57, Darren Helm fought off a check by Ed Jovanovski to get the puck along the back boards and send it out to Salei at the top of the right faceoff circle for a blast past Phoenix goalie Ilya Bryzgalov. At 2:41, a Niklas Kronwall shot deflected off of Drew Miller to make it 2-0.

Valtteri Filppula made it 3-0 just 2:50 into the second period, carrying the puck through the slot and into the left faceoff circle before flinging it past Bryzgalov.

David Schlemko got the Coyotes on the board with 8:17 left in the middle period. With Phoenix on a power play, Schlemko got the puck in the left circle and drove to the net, roofing a shot over Jimmy Howard’s shoulder.

Johan Franzen put Detroit back up by three 45 seconds into the third period, breaking in alone on Bryzgalov and sniping a shot over his shoulder.

Ray Whitney’s power play shot with seven minutes remaining deflected past Howard to put the Coyotes back within a pair but Phoenix would be unable to pull closer.

The Red Wings were scoreless on four power play attempts while the Coyotes’ two goals came on three tries with the extra attacker. The last five Phoenix goals have all been on the power play.

Howard finished the night with 28 saves on 30 shots. Bryzgalov made 30 stops on 34 chances.

Detroit was without forward Henrik Zetterberg for the fifth consecutive game. He is not expected to play in Game Four… Mike Modano and Jakub Kindl were healthy scratches for the Red Wings.