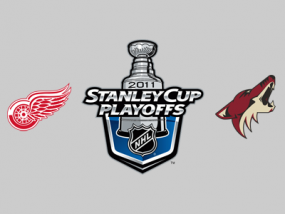 Obviously I’m thrilled with the Red Wings being up 3-0 in their opening round series with the Coyotes but I can’t help but look at some of the negatives of tonight’s 4-2 win.

The big thing is that the Detroit penalty kill has got to be better. It’s fantastic that the Wings are holding the Coyotes off the scoresheet at even strength but that’s five power play goals for Phoenix in the last two games. Unacceptable.

Part of that comes from getting the early lead and letting up. It happened on Saturday and it happened again tonight. I love seeing Detroit lighting up Ilya Bryzgalov (and who saw that happening?) but they keep resting on their laurels. A better team would make them pay for that.

I think the Wings have done a good job of matching Phoenix’s physicality in the series without getting (too) stupid about it. tonight was no different, though the Coyotes definitely won the special teams battle.

Part of me wonders how much fight Phoenix has left, considering how little they’ve been able to get going and that Wednesday’s Game Four could be their last game before relocating. I’d love to see them roll over but I don’t expect it, so Detroit will have to be ready.