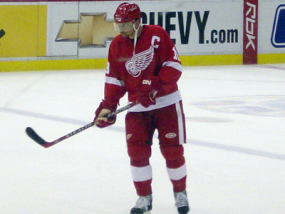 The Red Wings head to Toronto with a three-game winning streak on the line but with the Maple Leafs having only two wins on the season it’s hard not to look at the pregame ceremony as the more important event tonight.

As part of the annual Hall of Fame Game, the Class of 2009 will be honored prior to tonight’s matchup. Three former Red Wings are included in the class, headlined by longtime captain Steve Yzerman.

The ceremony will be televised by both FSD and the CBC and is expected to push the game’s start time back to 7:28.

The Wings will honor Yzerman at their first home game after Monday’s Hall of Fame induction ceremony, next Thursday against the Vancouver Canucks.

In actual game news, Detroit will be without Patrick Eaves, who is nursing a sore foot. He suffered the injury while blocking a shot in Thursday’s win over San Jose.

Brad May will return to the lineup to replace Eaves. May will play on the fourth line with Justin Abdelkader and Kirk Maltby while Ville Leino moves up to the third line to take Eaves’ spot alongside Kris Draper and Darren Helm.

No other lineup changes are expected. Chris Osgood will start in goal.