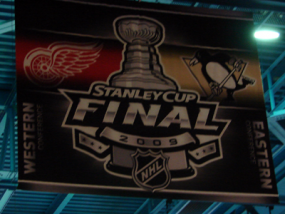 We’re inside twelve hours to the opening faceoff of tonight’s Game Seven and I think this is the last time I’ll have a clear thought until this thing is over.

Pittsburgh’s Petr Sykora is expected to miss Game Seven with a broken bone in his foot. Officially he’s a game-time decision but the team would have to be pretty low on Miroslav Satan to go with a broken-footed Sykora over him.

For Detroit, Dan Cleary and Brian Rafalski skipped Thursday’s practice but will play tonight. There are no expected lineup changes from Game Six.

I’ll be posting from my phone again tonight so there won’t be a lot of updates from me. If any big news comes up before I head out for Detroit, I’ll post it.


Game Seven Not What I Paid For