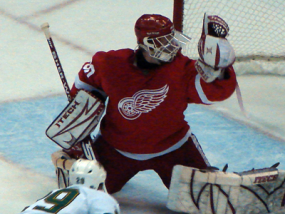 Both the Chief and Malik have commented multiple times on the Jimmy Howard call-up and Chris Osgood’s removal from the Red Wings’ lineup so I’ll throw my two cents in, too.

I’ve said before that I’m an Osgood fan. I’ve liked the guy since 1994, when he was crying in the locker room after the Game Seven loss to San Jose, the first time it actually looked like a Red Wings gave a damn about all of those early playoff exits from the early 1990s.

Osgood’s stop on Peter Zezel en route to a double-OT shutout in Game Seven of the 1996 Western Conference Semifinals is still one of my favorite saves of all time.

Look at his eyes after that stop, he’s unfazed. Osgood’s mental toughness has always been his strong point.

And that’s the problem this season. That toughness isn’t there, it’s been replaced with frustration at himself and with his team. So as much as I like Osgood I won’t deny that he’s very off his game.

If the playoffs started today, who would I start? I want to give Osgood the benefit of the doubt with the expectation that he’s out as soon as he falters, much like Hasek last season. That said, if he doesn’t snap out of it, I can’t say I’d blame Mike Babcock for going with Ty Conklin for Game One.

For years, Detroit has been a puck-possession team. Hold the puck, move the puck, keep the puck. If you have it, the other team doesn’t. And part of that kind of play is that the goalie is expected to keep play alive.

Osgood thrived in that system last year, controlling rebounds and putting them to places where his defenders could get to them. This year the Wings don’t get to the loose pucks as well and those formerly-controlled rebounds become rebound chances for the opposition. Conklin freezes the puck more than Osgood, saving himself from those rebound chances and relying on the Wings’ superb faceoff skills to get the puck back.

So do you blame Osgood for failing to adapt to his defense’s new laziness or do you blame the defense for not getting to the puck? As a goalie of a different kind, I understand Osgood’s frustration, preparing for a season expecting one kind of play from his defense only for them to play another style entirely.

All of that said, Osgood does need to get focused and this time off should serve him well. While he’s refocusing, though, the rest of his team needs to tidy up their game as well.

Howard Called Up, Will Start Saturday