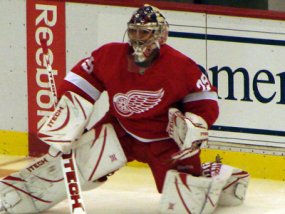 Conklin to Start Against Sharks

Ty Conklin gets the start in net for Detroit against the San Jose Sharks tonight as Chris Osgood is battling an injured groin.

To avoid the Red Wings needing to make a roster move, Osgood will back-up Conklin. If the team had needed to call up Jimmy Howard or Daniel Larsson from the Grand Rapids Griffins a player would have had to have been moved off of the Detroit roster.

Should Osgood’s injury keep him out longer he could be moved to the long-term injured reserve which would mean he would have to miss at least ten games. The only other current option for the Wings would be to move another player, either through waivers or a trade.