The Red Wings will retain his NHL rights as a restricted free agent by virtue of giving him a qualifying contract offer.

Almquist, 23, made his NHL debut this season, playing in two games for Detroit and scoring a goal. He had 14 goals and 70 assists in 144 career games for the Grand Rapids Griffins, the Red Wings’ American Hockey League affiliate.

If Almquist had not made the Red Wings’ roster out of this fall’s training camp, he would have been subject to waivers and a possible claim by another NHL team. Given that he had seemingly slipped down Detroit’s depth chart behind players such as Ryan Sproul, Xavier Ouellet and Alexey Marchenko, that had become a likely outcome. 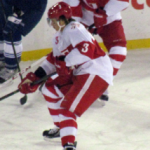