Of the procedure, Detroit assistant general manager Ryan Martin said, “It went very, very well. They removed part of a disc that was rubbing on a nerve. It was what they thought it was. The recovery process looks very, very positive.”

Zetterberg withdrew from the Olympics after one game as Sweden’s captain, citing a slightly herniated disk. He also missed 13 games with the Red Wings this season, including much of the month of December.

Should Zetterberg miss the expected eight weeks, his return would be during the first week of the Stanley Cup Playoffs. The Red Wings currently sit in eighth place in the Eastern Conference, one point up on three teams for the final wild card playoff spot. 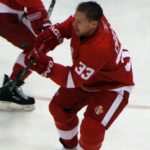 Draper to Have Surgery, Out 4-6 Weeks

Holmstrom to Have Surgery, Will Miss Three-to-Five Weeks

Detroit Red Wings forward Tomas Holmstrom will be out three-to-five weeks, the team announced Friday, as he will need to undergo surgery to repair a sports hernia.