Plans for the mixed-use development to be anchored by a new arena for the Detroit Red Wings were announced on Wednesday as the Downtown Development Authority approved a financing plan for the project.

A non-binding Memorandum of Understanding was agreed to by the DDA, Olympia Development and Wayne County, detailing the responsibilities for financing and management of the development, to be bounded by Woodward Ave. to the East, Temple St. to the North, Cass Ave. to the West and I-75 to the South.

The 18,000-seat successor to Joe Louis Arena would be the cornerstone of the development. The DDA would own the arena while Olympia would operate it. A similar agreement is in place for Joe Louis Arena.

The $650 million price tag for the development is expected to be covered by a public/private split. $365.5 million will be covered by private funds with the rest coming from public sources. The City of Detroit will put no money toward the project.

On Funding the Wings' New Arena

A few days ago there was an excellent fan post over at Winging it in Motown about the Red Wings' new arena. It touches on a lot of the economics of the project and the sources of the arena's funding but I wanted to further break down one of its points. 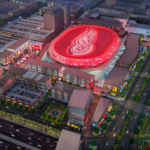 The Ilitch family made a splash earlier today when they revealed the plans for their "mixed-use sports and entertainment district," centered around a $650 million new arena for the Red Wings.