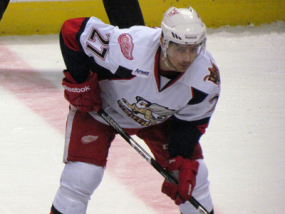 Forward Tomas Tatar was named the Most Valuable Player of the playoffs. He scored twice in the final game for a total of 16 goals and five assists for 21 points in 24 playoffs.

Richard Panik opened the game’s scoring with 2:45 remaining in the opening period, jamming a rebound chance past Petr Mrazek with the Grand Rapids netminder out of position.

The Griffins tied things back up at 2:23 of the second when Mitch Callahan whacked a shot from the inside edge of the right faceoff circle past Syracuse goalie Cedrick Desjardins.

Tatar’s first of the night put the Griffins up with 7:19 remaining in the middle frame. On a Grand Rapids power play, Tatar found open space on the far side of the crease and banged the rebound of a Gustav Nyquist chance past Desjardins.

Andrej Sustr would pull the Crunch back into a tie at 5:14 of the third but Brennan Evans snuck a shot from the left point through traffic and past Desjardins at 9:54 for the eventual game-winner.

Tatar and Joakim Andersson each added late-game empty-net goals to confirm the victory.