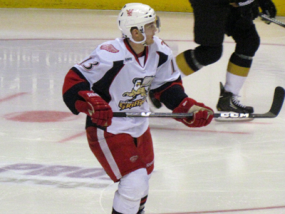 Nyquist leads the Griffins with 23 goals and 37 assists in 57 games with the club this season. In two games with the Red Wings he has been held scoreless.

Tatar scored four goals and added three assists in 18 games with the Red Wings. He currently sits second in scoring for the Griffins with 19 goals and 20 assists despite having played only 44 games.

The Red Wings begin a Western Canadian road trip on Wednesday when they visit the Calgary Flames.