The Detroit Red Wings rallied to force overtime in Chicago on Sunday night but fell to the Blackhawks, 2-1, on defenseman Nick Leddy‘s tally in the extra period.

Leddy was left alone on the left side of the ice as the Blackhawks gained the Detroit zone and took a pass from Viktor Stalberg. Damien Brunner got back to cover Leddy just as he let a shot go, which deflected off Brunner’s outstretched stick and past Detroit netminder Jimmy Howard to give the ‘Hawks the win at 2:45 of the overtime period.

The Red Wings reached overtime on a Johan Franzen goal at 4:30 of the third period. Franzen jumped up to knock home the rebound of a Damien Brunner chance to tie the game 1-1.

Chicago had opened the scoring early with a Duncan Keith blast from the left faceoff circle just 2:24 into the game, beating Howard high on the stick side on the first power play of the night.

Howard finished the night with 25 saves on 27 shots. Crawford stopped 29 of Detroit’s 30 chances.

Keith’s goal was the lone power play marker of the night. The Blackhawks had three tries with the extra attacker while the Red Wings had six.

With the win, the Blackhawks moved to 6-0 to start the season for the first time in franchise history.

Detroit is back in action on Tuesday when they host the Dallas Stars for the second time in a week.

The Red Wings got defenseman Jonathan Ericsson back from injury, forcing Jakub Kindl out of the lineup as a healthy scratch… Patrick Eaves was back in the lineup after being a healthy scratch on Friday against Minnesota, replacing Darren Helm, whose back injury flared up again and was unable to go. Helm will have an MRI on Monday… Remaining out of the lineup were the injured Jan Mursak, Mikael Samuelsson, Carlo Colaiacovo, Ian White and Jonas Gustavsson… With Gustavsson out, Howard was backed up again by Tom McCollum.

Bobby Ryan scored on a penalty shot 2:50 into overtime Wednesday night, lifting the Anaheim Ducks to a 2-1 win over the Detroit Red Wings.

The Detroit Red Wings dropped a 2-1 overtime decision to the New York Rangers on Wednesday night, stretching their losing streak to six games. 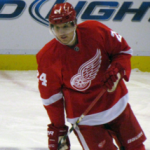 The Detroit Red Wings narrowly avoided being shutout for the second time in three games on Tuesday night, dropping a 2-1 decision in their home opener to the Dallas Stars.