The recap of the Red Wings’ recent roster moves, heading into tonight’s game against Ottawa…

Brad May has cleared waivers and has been given ten days to decide whether to report to Grand Rapids or retire. He’s done as a Wing, at least until the playoffs, and his $500,000 cap hit comes off the books.

Kirk Maltby could be done for the season but hasn’t decided yet. He’s been battling a shoulder injury that requires surgery. If he decides to have the surgery he’ll be out for two months – the rest of the regular season. Putting Maltby on long-term injured reserve would save the Red Wings $700,000, which when added to the savings from waiving May is enough to bring back Andreas Lilja.

Lilja did not play in the last game of his rehab stint with the Griffins on Friday, having been called to Detroit. He remains on LTIR but is likely to be cleared to play sometime during the Olympic break. 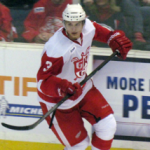