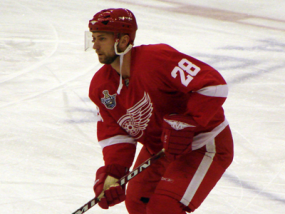 Andreas Lilja will make his first appearance of the season on the Red Wings’ blue line, having been cleared to play after suffering post-concussion symptoms for nearly a year. His last game was 366 days ago, February 28, 2009.

I’d been thinking that Lilja’s return combined with Rafalski having played three games in five days would lead to Rafalski sitting this one out but I’m not seeing any news on that front. I actually haven’t come across any lineup notes.

The Red Wings are as healthy as they’ve been all season, with Kirk Maltby the only injured player. With Maltby out and Brad May having been sent to Grand Rapids, the Red Wings will dress all 12 healthy forwards. Two defensemen will be scratched, with one of them possibly being dealt for a depth forward before Wednesday’s trade deadline.