drwcentral.net completed their newest redesign on Sunday, a week later than expected.

The new layout replaces the “Next Game” and “Last Game” features with a Fan Poll and allows for more featurs on the main page.

The main page now feautres part of a recap of the latest game, the latest news about the site or an editorial, information about what’s going on in the drwcentral.net Message Board Center, and a calendar showing the games being played that week.

The redesign applies to all drwcentral.net sites, including the drwcentral.net Fantasy Hockey league and the Message Board Center. The dFHL site will continue to carry a damaged version of the old site layout until the new layout can be applied to it.

Also part of the new layout is the drwcentral.net Keyword feature, which will allow users to jump from any part of drwcentral.net to another by entering a keyword.

The new layout, expected to have been launched in time for the start of the playoffs, was delayed due to time constraints.

The Red Wings did not win a playoff series while the old layout was in effect. 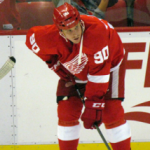 Late Monday night, several databases utilized on drwcentral.net were discovered to have been corrupted. As a result, much of Central's content is unavailable at this time.