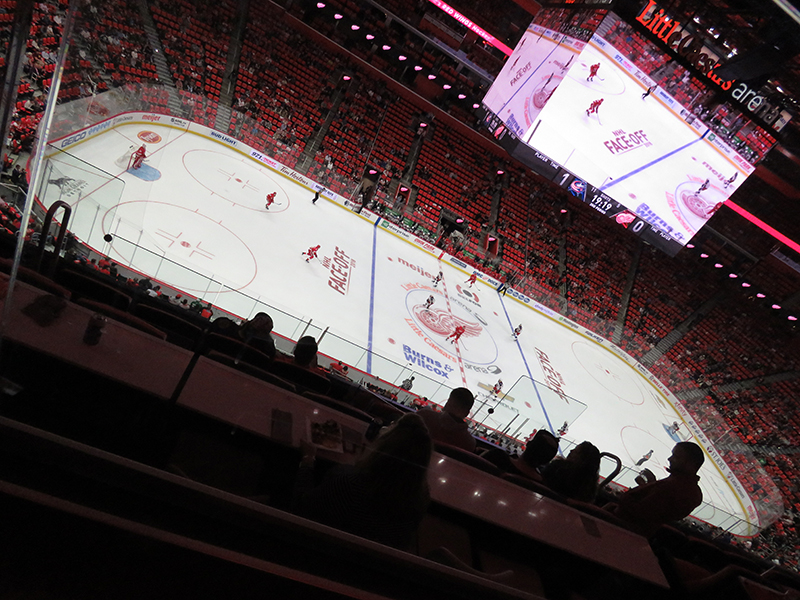 Yesterday, Ilitch Holdings announced that the red seats at Little Caesars Arena will be replaced by black ones in a project starting in December.

The bright red seats – and the lack of people in them – have been a point of discussion since the arena opened a year ago.

Neither the Red Wings nor the Pistons are particularly good right now and the arena was designed with “gathering places” that keep ticketholders out of the arena bowl.  This leaves large groups of empty bright red seats clearly visible to the TV audience.

Ilitch Holdings – who owns the arena – did not cite this perception as a reason for making the change, however.

“We evaluated every aspect of arena operations during the inaugural year and after numerous discussions with the Pistons and other stakeholders, we have made the decision to install black seats at Little Caesars Arena,” said Chris Granger, group president of Sports & Entertainment for Ilitch Holdings.

If there hadn’t been so much talk about how bad the empty red seats looked, it would be easy to take this statement at face value.  With the arena originally designed just for the Red Wings, after the first year this issue for the Pistons was found and so they’re fixing it.  We do have that context, though, so we can’t ignore it.

As a fan, it’s easy to say that one would rather see the organizations working to put people in those seats rather than masking the fact that they’re empty.  As I Tweeted this morning, Mike Ilitch famously gave away cars to get fans in the doors of Joe Louis Arena while he worked to rebuild the franchise.  That his son chooses to cover up the problem rather than actually fill the seats feels wrong.

That said, there are levels where it makes sense.

The cost of replacing the seats is reportedly $3.5 million.  If you applied that money to discounting tickets, over roughly 18500 seats and 80 home games between the Red Wings and Pistons, you’d get about a $2 discount per ticket per game.  It’s not enough to get those seats sold and it doesn’t account for future seasons.

Additionally, even if you find a way to make sure every ticket to every game is sold, the arena was designed with those aforementioned “gathering places.”  There’s nothing stopping people who bought tickets from hanging out somewhere other than their seat.  It’s too late to argue about whether or not the arena should have been built that way or why anyone would buy tickets to a game just to sit somewhere else to watch it but what can be changed is how it looks when that happens.

If Ilitch Holdings is trying to fix the optics of a bunch of empty seats, this isn’t a bad way to do it.  But as a fan, it still leaves me with a bad feeling.  It’s a reminder of just how much these teams are a passion for their fanbases but a business to their owners.

Thoughts on Game One