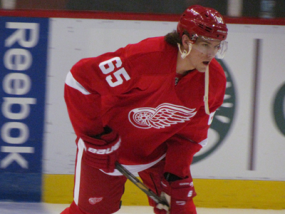 The Detroit Red Wings signed defenseman Danny DeKeyser to a six-year contract on Tuesday.  In agreeing to the deal, the sides avoided a potentially-contentious arbitration meeting scheduled for Thursday.

The contract breakdown is as follows:

Danny DeKeyser contract:
3 yr No Trade from 17-18 through 19-20
Last year and a half of contract is modified NTC 10 team list

With DeKeyser signed, the Red Wings’ top concern becomes goalie Petr Mrazek, who is scheduled for an arbitration meeting on Wednesday.

My concern with the DeKeyser deal is that, once again, Ken Holland is giving a player long-term money based on his potential, not what he’s proven.

$5 million per season is #2 defenseman money.  I think DeKeyser is the best defenseman on this team, which isn’t saying much.  I think he could be a top defenseman eventually.  I do not think he’ll be worth $5 million in the 2016-17 season.

Giving out contracts like this is a gamble.  Maybe by the second year, he’s taken a step forward and become a legitimate #1 defenseman and it’s a bargain for the rest of the deal.  If not, though…  This is how you get healthy scratches making $2 million (the now-departed Jakub Kindl).