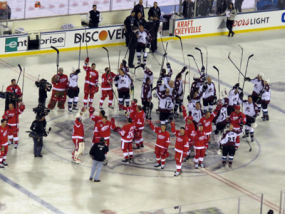 If you were following DetroitHockey.Net on Twitter during the Red Wings – Avalanche alumni game at Coors Field (before my phone battery died on me), you could probably see the narrative I found most interesting about the event. It’s something I commented on when the ticket sale for this game was announced and when the rumor that the Red Wings might be visiting the Toronto Maple Leafs for an outdoor game last year broke.

When Detroit hosted their outdoor game, half the stadium was reserved for Toronto fans. The scoreboard videos pandered to each fanbase. Merchandise stands had items representing both teams. Even in Detroit at the Alumni Showdown at Comerica Park, the rivalry was celebrated rather than the individual teams. It was treated much as a neutral-site game.

But come out to Colorado and it is very much an Avalanche home game. The video about the rivalry consisted mostly of Colorado goals and Patrick Roy saves. There was no clip of Claude Lemieux turtling, Roy left bloodied at the hands of Mike Vernon, or his Statue of Liberty save.

So it’s frustrating to have been to Detroit’s “home” game and seen extra effort made to make the visitors feel welcome, only to not have it happen when the tables are turned. Maybe the next time the Red Wings host one of these, they’ll get to keep it as a home game.

As for the game itself, I was shocked to see the final shot totals. Both Patrick Roy and Craig Billington made some really solid saves for the Avalanche but overall it felt like the Red Wings never got anything going. By shot totals, it seems like the goalies stole the show. I never got the feeling that Detroit was pressuring that much, though.

I did get the feeling that the Avalanche simply cared more. There were quite a few times a Colorado defender laid out to block a shot or a pass and it doesn’t seem like that happened as much in the Detroit end. The feeling I couldn’t shake throughout the game was that the Red Wings were just having fun and the Avalanche were trying to win.

I took a bunch of photos, mostly during warm-ups, and will aim to have those on the site next week.