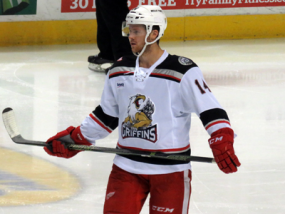 44
0
by Clark Rasmussen
In General News

The Detroit Red Wings announced on Sunday that defenseman Nick Jensen and forward Eric Tangradi were called up from the Grand Rapids Griffins. To help make room for the pair, forward Joakim Andersson – who cleared waivers at noon on Saturday – was sent to the Griffins.

Jensen gives the Red Wings seven defensemen on the roster with Niklas Kronwall recovering from knee surgery. The extra blueliner may be required, as Brendan Smith left Saturday’s game late in the third period and has been dealing with an unspecified injury.

Originally Detroit’s fifth round selection (150th overall) in the 2009 NHL Entry Draft, Jensen, 25, has eight goals and 36 assists over the last three seasons with the Griffins. He has yet to make his Red Wings debut.

Tangradi, signed as a free agent by the Red Wings last summer, is the Griffins’ heading scorer with 31 points in 36 games. He was called up to Detroit earlier this season but did not make an appearance in the lineup. In 143 career NHL games, Tangradi has five goals and ten assists for the Pittsburgh Penguins, Winnipeg Jets, and Montreal Canadiens.

Andersson will rejoin a Griffins team for whom he scored 38 goals and 63 assists in 189 career games. In 25 games with the Red Wings this season, he has one goal and two assists in a fourth-line role.

Jensen and Tangradi could be in the lineup for the Red Wings on Monday when they visit the New York Islanders.