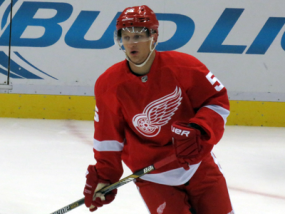 Pulkkinen Scores in OT to Lift Red Wings over Blues

Detroit forward Teemu Pulkkinen scored with just 18.8 seconds remaining in overtime to give the Red Wings a 4-3 win over the host St. Louis Blues on Saturday night.

Pulkkinen scored on a blast past St. Louis netminder Jake Allen from the top of the right faceoff circle with Detroit on a power play.

The Blues forced overtime on a goal with 2:10 left in regulation. Henrik Zetterberg failed to get the puck deep on a dump-in and the Red Wings were caught on a line change, with Vladimir Tarasenko breaking down the right wing. Tarasenko cut to the front of the net and snapped a shot past Detroit goalie Jimmy Howard.

Pavel Datsyuk’s first goal of the season opened the scoring with 9:56 left in the first period. Brad Richards sent a pass from behind the goal to Datsyuk out front to put past Allen for the 1-0 lead.

Just over three minutes later, Kyle Brodziak snapped a shot from the right wing past Howard to tie things up. Jori Lehtera put the Blues in front 1:40 after that, tipping a Jay Bouwmeester shot past Howard for a 2-1 lead.

Luke Glendening fought off a check to even things up before the end of the period, banging a chance past Allen from the slot with 1:29 left.

At 8:42 of the second, Dylan Larkin restored Detroit’s lead when a Zetterberg shot deflected off his arm and in to make it 3-2.

Howard finished the night with 30 saves on 33 shots while Allen stopped 28 of 32 chances against.

Each team had two power play opportunities with Pulkkinen’s goal the only one scored with the man-advantage.

The Red Wings are now off until Wednesday when they host the Boston Bruins.