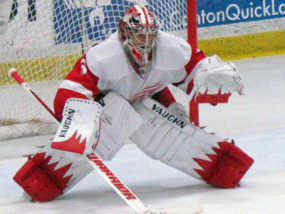 The Detroit Red Wings’s porous defense couldn’t stop the St. Louis Blues on Saturday night and their offense never got going, with the Blues taking a 6-0 win in the opening game of the 2013 season.

Special teams led the way for the Blues, with four of their goals coming with the man-advantage and a fifth coming while shorthanded.

The Red Wings, meanwhile, took only 14 shots on the night. None particularly challenging to Blues’ netminder Jaroslav Halak, save for one third-period goalmouth scramble.

Rookie Vladimir Tarasenko opened the scoring for the Blues at 6:36 of the first. Detroit defenseman Kyle Quincey couldn’t cut off a long pass from Ian Cole to Tarasenko at the Detroit blue line, leaving Tarasenko on a breakaway where he beat goalie Jimmy Howard high on the stick side.

Chris Stewart’s power play goal with 6:14 left in the period made it 2-0. After Stewart’s wraparound attempt, Howard lost track of the puck and sprawled out on his stomach facing the goal. By the time he realized he hadn’t covered it, Stewart had the puck in the slot and snapped a shot into the net.

Tarasenko’s second of the game put the Blues up by three just 29 seconds into the second period. Skating up the left wing, Tarasenko blew past Quincey to break in on Howard, beating him stick-side again.

T.J. Oshie scored a shorthanded goal with 4:51 left in the period to make it 4-0. Oshie slipped past the Detroit defense at the St. Louis blue line and Alex Pietrangelo hit him with a long pass to spring him in alone on Howard for a breakaway goal.

Stewart’s second of the night at 1:15 of the third was the end of the night for Howard. Stewart beat Howard on another power play breakaway opportunity to make it 5-0 and bring Jonas Gustavsson into the game in the Red Wings’ crease.

Patrik Berlund rounded out the scoring with 5:25 left in regulation, a power play deflection past Gustavsson.

The Red Wings are back at it on Monday when they visit the Columbus Blue Jackets.

Detroit forward Jan Mursak left the game with a shoulder injury after the first period. He is expected to undergo testing on Sunday.