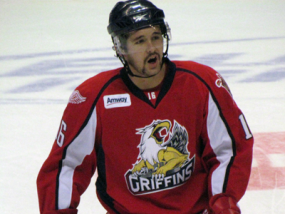 140
0
by Clark Rasmussen
In General

Twitter user @FlamezGaming Tweeted what appears to be a screen capture of the game’s team select menu, which was later retweeted by SportsLogos.Net. The menu, in which teams are identified by their primary logo, featured the Griffins’ “Griffzilla” logo rather than their traditional emblem.

The Griffins organization did not respond to a request for comment about the possible change.

The Griffzilla logo, so named because it features a stylized Griffin climbing over the Grand Rapids skyline reminiscent of Godzilla, has been used on the team’s red alternate jerseys since the 2012-13 season. The jersey on which is appears is a clone of the Washington Capitals’ home jersey.

The possibly-outgoing primary logo has been in use since the Griffins’ inaugural season. It was the crest for three sets of home and road jerseys – the team’s original design, the modified version of that template worn after their affiliation with the Detroit Red Wings, and the current Reebok Edge set.

One sign that the leak may not be true is that the 20th Season logo unveiled by the Griffins in January features the current primary logo rather than the “new” one. Another sign is that the American Hockey League’s online store currently has all jerseys that have been updated for the 2015-16 season on clearance and the Griffins are not included in that sale.

A sign in favor of the logo change is that the Griffins’ own online store currently has only two pieces of merchandise available and the current logo does not feature prominently on either. It’s possible that the merchandise has been cleared out to make room for items featuring the new logo.

Update, 9:35 PM: Another piece of evidence pointing towards the Griffzilla logo becoming the new primary of the Griffins comes in the form of a trademark filing by West Michigan Hockey, Inc.

Last December the Griffins’ parent company filed for a trademark on an updated version of the Griffzilla logo, featuring darker colors and slightly more detail. This is the logo that appears in NHL 16.

That said, it’s entirely possible this update was made for continued use as an alternate mark.


On the Griffins’ (Apparent) New Logo