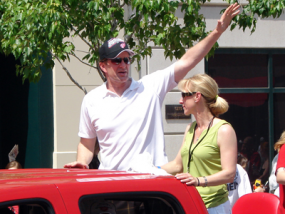 The Toronto Maple Leafs have hired Mike Babcock as their head coach.

Babcock had spent the last ten years as the head coach of the Detroit Red Wings and was highly sought after with his contract expiring this summer. Multiple teams had asked the Red Wings for permission to talk to Babcock about their coaching vacancies, with Babcock reportedly having narrowed it down to a return to Detroit or the Buffalo Sabres on Tuesday night.

On Wednesday a bidding war erupted between the Sabres and the Maple Leafs. One by one, the Sabres, Red Wings, St. Louis Blues, and San Jose Sharks confirmed that they were out of the running, with only the Maple Leafs remaining.

The Maple Leafs announced Babcock’s hiring shortly after, with a press conference scheduled for 11:00 AM on Thursday.

Babcock’s deal with Toronto is reportedly worth $50 million over eight seasons, the largest contract for a coach in NHL history.

Mike Babcock and the Diving Save