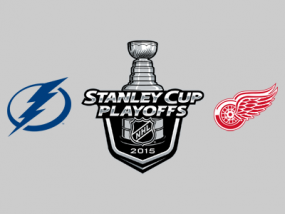 The game is close to a must-win for the Red Wings, as they managed to steal away home-ice advantage from the second-seeded Lightning with a Game One win but can lose it right back with a loss in either of the next two games.

Detroit netminder Petr Mrazek, pulled after allowing four goals on 18 shots in two periods in Game Two, returns to the crease for the Red Wings. The Wings also get back forward Justin Abdelkader, who replaces Stephen Weiss in the lineup. Defenseman Brendan Smith swaps in for Alexey Marchenko on the blue line.

Stupid stat of the day: In his professional career, Petr Mrazek has never lost a series in which he won Game One and lost Game Two.

Red Wings Fall to Lightning, Series Even at 1-1