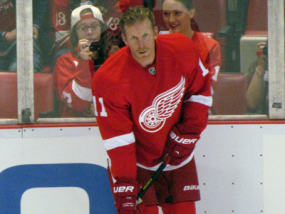 95
0
by Clark Rasmussen
In General News

Alfredsson, who will turn 42 next week, had been attempting to return to the Red Wings for one more season after a back injury kept him out of the final two games of the playoffs. His rehabilitation efforts weren’t enough, though, and he found himself unable to play without pain.

He made the announcement while signing a one-day contract with the Ottawa Senators, the team for which he played his first 17 seasons and captained for 13 seasons.

Alfredsson signed with the Red Wings as an unrestricted free agent in the summer of 2013 after a contract dispute with the Senators. In his lone season with Detroit, he led the team in scoring with 49 points in 68 games.

After making the decision to retire three weeks ago, Detroit general manager encouraged him to retire as a Senator, Alfredsson said. He will skate with Ottawa in pre-game warmups before the Senators’ game against the New York Islanders tonight.