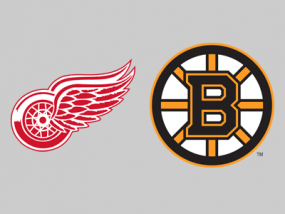 For the second time in the first three games of the season, the Boston Bruins are back at Joe Louis Arena for a matchup with the Red Wings.

Detroit is coming off a controversial loss to the Anaheim Ducks last Saturday, with Ryan Getzlaf having scored the game winning goal in the closing seconds after hooking Niklas Kronwall to steal the puck from him.

The Bruins are a disappointing 1-3, having lost their last three games after opening the season with a win. They’ll get center David Krejci back from injury tonight, though.

The Red Wings are still without Pavel Datsyuk and will skate with the same lineup they used in their first two games. The big change is that Gustav Nyquist and Justin Abdelkader will start the game having swapped spots, a move head coach Mike Babcock has made in-game in the first two games. Nyquist will skate with Henrik Zetterberg and Johan Franzen while Abdelkader joins Darren Helm and Andrej Nestrasil.

Jimmy Howard gets the start in net for Detroit while Boston will go with Tuukka Rask.

Stupid stat of the day: The Red Wings haven’t beaten an Original Six opponent on October 15 since a 5-3 win over the Toronto Maple Leafs in 1988.