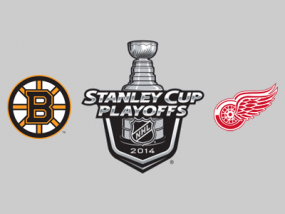 The big news as the Red Wings’ first-round series with the Boston Bruins shifts to Detroit is that the Wings will be without forward Daniel Alfredsson, whose back issues have flared up again. Joakim Andersson takes his spot in the lineup, making his first appearance of the postseason.

Coming off a 4-1 loss in Game Two, the pressure is on the Red Wings now. They won Game One to “steal” home ice from the Bruins but if they lose either of the next two, they’ll just have given it right back.

I half-expect a split of the next two games, which gives us a three-game series with Boston having home ice. I think a longer series benefits Detroit, though, so that may not be a bad thing.

As I said in the postgame on Sunday, it’s going to come down to which team plays their game more. Detroit controlled Game One (and it was still painfully close) while Boston ran Game Two. My concern for Detroit is that Boston can win a Detroit-style game but the Wings can’t win a Bruins-style one.

Stupid stat of the day: The Red Wings are 4-4 all-time in Game Threes played on a Tuesday where the series is tied.