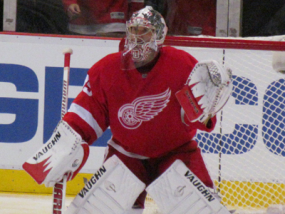 106
0
by Clark Rasmussen
In Game Recap

Detroit’s Jimmy Howard and San Jose’s Antti Niemi each earned a shutout on Monday night but the Sharks came away with the win, as Logan Couture scored the only goal of the shootout for a 1-0 win over the Red Wings.

Howard stopped all 27 shots he faced in 65 minutes of play and forced Patrick Marleau to the outside on the first San Jose shootout attempt before Couture scored on the second.

Niemi made 24 saves before Pavel Datsyuk missed and Daniel Alfredsson fired a shot into him. With the chance to seal the victory, Niemi made a spectacular save on Todd Bertuzzi, recovering from an initial fake-out to lift his pad into the air behind him and knock down Bertuzzi’s shot.

For the only goal of the contest, Couture made a quick fake in the slot and cut to his left, snapping a shot past Howard.

The Red Wings were without defensemen Niklas Kronwall (concussion) and Jonathan Ericsson (paternity leave). Xavier Ouellet made his NHL debut to fill the gap… Prior to the game, forward Luke Glendening was sent down to the Grand Rapids Griffins to make room on the roster for Ouellet… Mikael Samuelsson was the only healthy scratch at forward.


Ericsson Out Two to Three Weeks