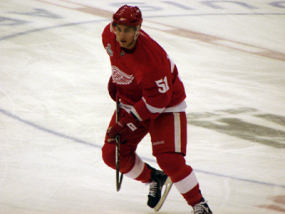 77
0
by Clark Rasmussen
In Game Recap

The Detroit Red Wings became just the eighth team in NHL history to rally from down 3-0 in a series and force Game Seven, defeating the San Jose Sharks 3-1 in Game Six Tuesday night.

The teams will meet in the deciding game of their Western Conference Semifinal matchup on Thursday night.

With their season on the line for the third consecutive game, the Red Wings dominated early but were unable to beat Sharks goalie Antti Niemi. Detroit outshot San Jose 32-13 through the first two period but the game was still scoreless heading into the third.

Logan Couture beat Jimmy Howard to give the Sharks a 1-0 lead at 3:54 of the closing period. After the Red Wings failed to clear their zone, Dany Heatley put a shot on net that Howard knocked aside. Couture swatted the rebound between Howard’s pads and it just barely crossed the goal line.

Henrik Zetterberg tied things up with 9:22 left in the period, tipping a Niklas Kronwall shot high over Niemi and into the top of the net.

Just 1:54 later, Valtteri Filppula took a feed from from Pavel Datsyuk at the top of the crease and tipped the puck past Niemi to put the Red Wings in front with 7:28 to play.

After Detroit killed a late penalty, Darren Helm added an empty net goal to finish off the game’s scoring and ensure that the series would return to San Jose.

Niemi finished the night with 42 saves on 44 shots. Howard made 24 saves on 25 chances.

Neither team scored a power play goal. Detroit had six chances with the extra attacker to San Jose’s four.

The Red Wings were without Johan Franzen for the game, out with a sore ankle that was aggravated in Game Five after a hit by Joe Thornton. Mike Modano replaced him in the lineup. Jiri Hudler was also swapped in for Kris Draper, while Jakub Kindl remained a healthy scratch on defense… The Sharks were without Ryane Clowe, who did not make the trip to Detroit. Ben Eager played in his place.