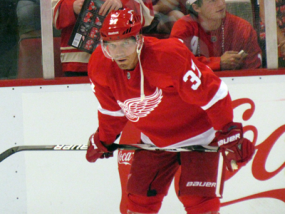 The Detroit Red Wings held off a third-period comeback attempt by the Buffalo Sabres on Wednesday night, earning a 2-1 win in their season opener.

Detroit had carried a 2-0 lead into the final period but the Sabres scored late to make for an exciting finish.

With 7:24 remaining, Red Wings’ netminder Jimmy Howard attempted to play the puck behind the net but Brian Flynn raced in after him. Howard’s clearing chance was blocked by Flynn and the puck deflected out in front of the net to Zemgus Girgensons. Howard made it back out into the crease in time to stack the pads but Girgensons threw the puck into the open top of the net.

The Red Wings had opened the scoring with 7:55 left in the first period, when Mikael Samuelsson tipped a Cory Emmerton pass in behind Buffalo goalie Ryan Miller from the right side of the slot on a rush.

Just 36 seconds later, Pavel Datsyuk made it 2-0 when he dragged the puck from the right circle through the slot and flung a backhander past Miller.

Emmerton had a chance to make it 3-0 wit 7:41 remaining in the middle frame when Thomas Vanek tripped him on a breakaway, leading to a penalty shot. Emmerton’s snap from the slot was easily stopped by Miller, keeping the game within reach for Buffalo.

Miller finished the night with 32 saves on 34 shots while Howard stopped 19 of the 20 he faced.

Neither team scored a power play goal. Detroit had three tries with the extra attacker while Buffalo had seven, including two five-on-threes.

The Red Wings are next in action when they visit the Carolina Hurricanes on Friday.

The game was Detroit’s first as a member of the Eastern Conference… Tomas Tatar and Brian Lashoff were healthy scratches for the Red Wings.