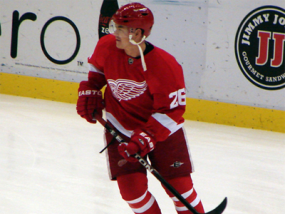 51
0
by Clark Rasmussen
In Game Recap

The Sabres led 2-0 after the first period before the Red Wings rallied.

Hudler tied the game up with 58 seconds left in the third period. He jumped off the bench as an extra attacker just in time to jump into the play and put the rebound of a Johan Franzen shot past Sabres netminder Ryan Miller.

Pavel Datsyuk had gotten the Red Wings on the board with 9:17 left in the second period, with Detroit on a power play. Datsyuk’s attempted shot from the high slot was blocked but the puck came right back to him to swat through traffic and past Miller.

Datsyuk and Hudler provided the scoring in the shootout, as well. Datsyuk beat Miller on a backhand on Detroit’s first attempt and Hudler tried the same move, putting a shot off the crossbar before the puck bounced back down off Miller’s back and across the goal line.

Buffalo scored twice in 2:04 in the first period to get out to their early lead.

Andrej Sekera lifted a backhander on a quick two-on-one over MacDonald with 7:05 left in the period.

With 5:01 left, Mike Grier kicked the puck from his skate to his stick and beat MacDonald from in close to make it 2-0.

Datsyuk’s goal was the lone power play goal of the night. Detroit had two tries with the man-advantage to Buffalo’s one.

The Red Wings continue their five-game road trip in Los Angeles on Monday when they face the Kings.

Detroit was without defenseman Brian Rafalski, who missed the game with back spasms. He is expected to return in Los Angeles. Jakub Kindl played in his place… Mike Modano and Valtteri Filppula returned to the Red Wings lineup from injury. Drew Miller was a healthy scratch to make room for them.