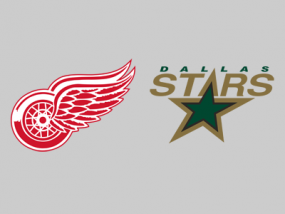 I said before the game that the Red Wings’ effort would have to be raised against the Stars and unfortunately it was not. Dallas took advantages of the opportunities they got and Detroit couldn’t respond. My thoughts on the night, in no particular order…

Effort, or lack thereof
I tweeted about this (and a lot of the things I’m going to write) but I think the play leading to Jamie Langenbrunner’s ENG sums things up nicely. Four Wings on one Star with the puck. Puck gets out to Langenbrunner. Goal.

How do you have a four on one and not come up with the puck in the game’s dying minutes? At that point it’s better to take a penalty running the guy into the ground than it is to lose the puck. You have to make the effort. But no one made a move, the puck gets out, and then it’s in the Detroit net.

Ericsson vs. Ott
Worthless fight. Give Ericsson the win but it accomplished nothing. The Wings could have built off of it so I have no idea why Ott would even be willing to drop the gloves. Of course, they didn’t, so he’s off the hook for that.

Lehtonen
Kari Lehtonen came up with some big stops at key times. The scoresheet says he made 38 saves but I can’t believe the Wings got that many shots through. Bottom line is he kept the Stars in front when Detroit (finally) attempted to mount a comeback.

Booing
Debate about whether or not it’s okay to boo your team raged on Twitter during this game. For a long time I thought it was classless to boo the team you’re a fan of but I’ve since changed my mind.

If you’ll recall, my brain kind of broke after attending Game Seven of the 2009 Finals. Not because of the outcome but because of the effort. I had just paid something like $250 to watch the Red Wings skate like the game didn’t matter.

When you buy your ticket you can’t dictate what kind of game you’re going to see. Lots of stuff happens in a game, you don’t get to say something like, “I only want to go if it’s a win.” There are things you should be able to expect, however, such as the level of play.

You buy a ticket to an NHL game expecting an NHL-level game. When the Red Wings don’t put in the effort, you are not getting what you paid for. In that case, you absolutely have the right to boo.

There’s not a fine line on this. I still think booing your team is tacky. I just think that if your team isn’t putting in the effort they’re not really your team anymore.

Officiating
Okay, I don’t like the Rafalski goal that was called back but I’m not sure it was the wrong call. There was incidental contact. By the book, the right call was made.

That said, I don’t know the last time I saw that call go the other way. I’d have a lot less of an issue with it if I didn’t have the feeling that it would have been allowed were it a Goligoski shot past Howard with Ott screening. No official rule or specific play to back that up, just a feeling.

Dallas’ second goal… Bouncing puck gets past Niklas Kronwall at the point and Loui Eriksson races in all alone to stuff it past Howard. Two lucky bounces?

Dallas’ third goal… Stars on the two-on-one, Rafalski blocks the pass but it comes right back to Barch, whose shot then deflects on its way past Howard.

That’s a lot of bounces going against Detroit. I know better defense takes care of that but you need luck, too, and they didn’t get it tonight.

Wrapup
Mike Modano and (possibly) Valtteri Filppula will be back on Saturday so maybe that’ll shake things up a bit. The Wings begin their epic five-game West Coast road trip in Buffalo (WTF?) and this could have major playoff implications, so they’ll have t get their act together.