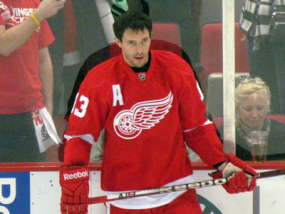 The Detroit Red Wings scored eight times on Thursday night, getting goals from eight different players en route to a 8-2 preseason victory over the Bruins in Boston.

Boston prospect goalie Malcolm Subban allowed all eight Detroit goals, facing 27 shots on the night. Detroit netminder Jimmy Howard stopped 14 of 15 shots in the first two periods before being replaced by Tom McCollum for the third.

Justin Abdelkader opened the game’s scoring on the power play at 5:01 of the first period, kicking a rebound chance from his skate to his stick at the top of the crease and knocking the puck past Subban.

Grand Rapids Griffins forward David McIntyre made it 2-0 with 3:53 remaining in the period when he lifted a backhander into the net in a goal-mouth scramble on a delayed penalty.

Henrik Zetterber’s slapper from the high slot off a feed from the left wing by Pavel Datsyuk made it 3-0 at 3:28 of the second period and Danny DeKeyser made it 4-0 at 9:17 when he snapped a shot past Subban from down low in the right circle.

Jarome Iginla finally got the Bruins on the board with 8:13 left in the middle period. Matt Bartkowski sent the puck from the left wing to the front of the net and Iginla redirected it past Howard with his skate.

Daniel Cleary started Detroit’s four-goal third period on a two-on-one with Tomas Tatar. Cleary grabbed a loose puck in the Detroit zone and carried it the length of the ice down the right wing before cutting to the net and shoveling a backhander past Subban.

Nick Johnson would score the only goal against McCollum with 8:28 remaining, taking a pass in the high slot and faking around Datsyuk to cut to the front of the net and roof a backhander over the goaltender.

Niklas Kronwall would respond with a power play goal just 1:24 later, firing a blast from the blue line that deflected off the stick of Daniel Paille in the slot on its way past Subban.

Only 32 seconds after that, Joakim Andersson golfed the rebound of a Gustav Nyquist shot in behind Subban to make it 7-2.

Datsyuk would round out the scoring with 5:47 remaining, taking a long stretch pass from Zetterberg to break in on Subban all alone and beat him top shelf.

The Red Wings were without forwards Daniel Alfredsson and Johan Franzen, who were allowed to rest minor injuries… Earlier in the day Patrick Eaves suffered a leg injury in practice… Jakub Kindl left the game early with a hip flexor… Before the game, forward Teemu Pulkkinen was suspended for four preseason games for boarding in Tuesday’s game in Chicago.