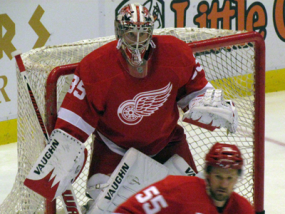 The Detroit Red Wings made it official on Tuesday, announcing the signing of a six-year contract extension for goaltender Jimmy Howard.

Howard had spoken about the deal late last week, stating that the two sides were “really, really, really close” to an agreement.

Though team policy prevents the release of financial details, the contract is reportedly worth $31.8 million, good for a $5.3 million salary cap hit. It makes Howard the Red Wings’ highest-paid goalie since the team had both Dominik Hasek and Curtis Joseph signed to $8-million deals during the 2003-04 season.

With the signing, the Red Wings are projected to have approximately $12.5 million remaining in cap space for the 2013-14 season, with 18 current roster players (including goalie Jared Coreau) already signed. The team has nine pending free agents. Brendan Smith, Jakub Kindl, Gustav Nyquist and Joakim Andersson will be restricted free agents while Damien Brunner, Valtteri Filppula, Daniel Cleary, Drew Miller and Ian White will be unrestricted.


The Slow Death of Hockey in Flint