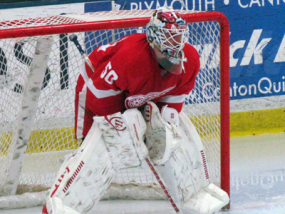 Jonas Gustavsson stopped the Coyotes’ Lauri Korpikoski on a penalty shot with 4:12 remaining in regulation on Monday night, keeping Phoenix from tying the game late as the Detroit Red Wings held on for a 3-2 win.

Gustavsson made 29 saves on 31 shots to earn his second win of the season. Phoenix netminder Jason Labarbera stopped 32 of the 35 shots he faced in the loss.

Ian White got the Red Wings on the board 4:01 in, snapping a shot from the blue line through traffic and past Labarbera to make it 1-0.

Phoenix responded 3:55 later when Martin Hanzal tipped a Radim Vrbata shot from the left wing past Gustavsson on a power play.

The Coyotes got out in front with 7:43 left in the period. After the Red Wings failed to clear the zone, Keith Yandle fired a shot on net. Gustavsson stopped Yandle’s shot and a rebound attempt from in front by David Moss but Rob Klinkhammer jumped into the play and roofed it over the sprawling goalie, making it 2-1.

Johan Franzen evened things back up with 39 seconds remaining in the second period. On a Red Wings’ power play, Niklas Kronwall faked a shot from the left wing before feeding Franzen in the slot for a snap past Labarbera.

Pavel Datsyuk put the Wings back in front with a power play goal 6:12 into the third. Henrik Zetterberg took the puck behind the Phoenix net before sending a pass out front. The puck bounced off defenseman David Schlemko’s skate and settled down at the edge of the crease for Datsyuk to scoop up and lift past Labarbera to make it 3-2.

The Red Wings scored twice on five total power plays. The Coyotes had three power plays and scored on one of them.