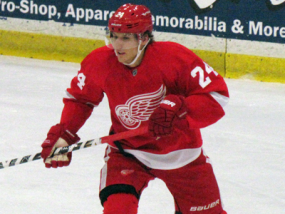 Brunner faked out Columbus netminder Sergei Bobrovsky, dragging the puck to his left to jam it between the post and Bobrovsky’s outstretched pad for the only goal of the shootout.

Pavel Datsyuk, Valtteri Filppula and Henrik Zetterberg failed to score for Detroit earlier in the shootout. Cam Atkinson, Artem Anisimov, Ryan Johansen and Matt Calvert were held off by Detroit’s Jimmy Howard, though Atkinson appeared to score before video review showed that he took two shots by knocking in a rebound chance.

After a scoreless first period, Red Wings’ defenseman Brian Lashoff, making his first NHL appearance in place of the injured Jonathan Ericsson, opened the game’s scoring at 1:10 of the second. After Mikael Samuelsson’s one-timer from the top of the left faceoff circle was blocked, Samuelsson got the rebound and sent it to Lashoff at the blue line for a blast that found its way through a Johan Franzen screen and past Bobrovsky.

Detroit’s defense contributed again to make it 2-0 with 5:54 left in the period. Franzen lugged the puck through the left circle and drew a group of defenders to him before sending it across to Ian White in the right circle for a shot over Bobrovsky and under the bar, into the top of the net.

The Blue Jackets began their rally 1:14 later. Atkinson split Kyle Quincey and Brendan Smith after taking a pass from Johansen, breaking in alone to beat Howard.

At 3:24 of the third period, James Wisniewski fired a blast from the blue line with the Blue Jackets on a power play to tie things up.

Vinny Prospal put Columbus out in front with another power play goal at 8:43 of the third. Nikita Nikitin’s shot from up high bounced off the glass behind the net and came back out front. With Howard spun around, Prospal put home the rebound from the slot to make it 3-2.

Datsyuk made it 3-3 with 6:04 left in regulation, just as a Detroit power play expired. Niklas Kronwall got the puck all alone in the slot and raced down the middle. His delay drew everyone to him, leaving Datsyuk wide open at the side of the net to take a pass and knock the puck home.

Because that goal came just seconds late, the Red Wings finished the night scoreless on seven power play tries. Columbus had two goals on seven attempts with the extra attacker.

Howard made 30 saves on 33 Columbus shots on the night to earn his first win of the season. Bobrovsky stopped 39 of the Red Wings’ 42 chances.

The Red Wings are right back in it on Tuesday when the host the Dallas Stars in their home opener.