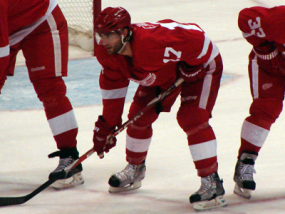 92
0
by Clark Rasmussen
In General News

Detroit Red Wings forward Patrick Eaves has been cleared to return to play, almost 14 months after suffering a broken jaw and concussion.

Eaves blocked a Roman Josi shot with the side of his head in a 4-1 win over the Nashville Predators on November 26, 2011. The impact broke his jaw and he was expected to be out for a matter of weeks. It was eventually revealed that he also had a concussion. Post-concussion symptoms kept him out for the remainder of the season and would have meant he was not ready to return in time for the 2012-13 season had it started on time.

With Eaves returning and Tomas Holmstrom retiring, the Red Wings have 15 forwards on their roster. Darren Helm will likely start the regular season on short-term injured reserve with a sore back but his return will cause the team to need to drop a forward.


A Quick Note on Damien Brunner